Last Saturday, we went  back to Taiping for a 2D1N weekend. To be exact, minus the travelling time we used on the road, we were in Taiping for around 24 hours only.

Spent some quality time with Kimi… This round back, we brought back some of his existing toys which he had in KL back for him. Otherwise, he is busy watching TV most of his time. PIL bought him a new white board, so asked us to bring back his magnetic alphabets and numbers for him. Haha, when I searched back in my house, most of it also cannot be tracked, don’t know where Kimi placed them. So we decided to buy another new packet for him. This time we bought a bigger set so that he can have enough to play and learn 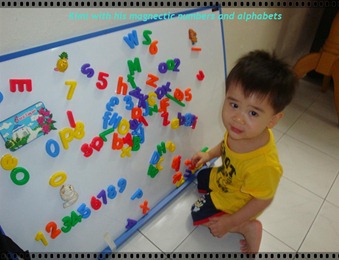 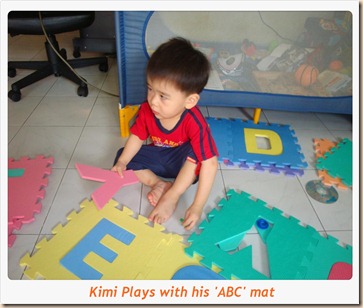 One of Kimi’s activities is to watch cartoons… He can on the TV and DVD player himself, and then choose the DVD he wants to watch, places it correctly in the player and plays it. After that, he will take out his favourite chair and sits down to watch the cartoons. This is how he sits occasionally, leisure style… But most time he will be half-sitting or half-standing while watching TV and laughs out loudly when he sees funny actions (through his own imaginations). Hehe ~~ 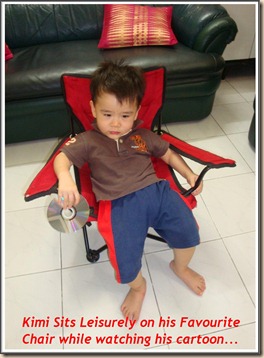 Kimi can say out ‘1,2,3’ in mandarin once a while, and sometimes miss out the no. ‘2’. I don’t think I teach him numbers in mandarin before, perhaps he always sees me taking out camera and before I capture the photo of him, will always say, “Kimi, 1,2,3… Smile!”. So, he learns how to pronounce these 3 numbers through our daily actions. Now, whenever I play running activities with him, he will stand there, and then counts '1,2,3’ and OFF he runs! This is a very tiring activity for me and cannot always play because Kimi really has unlimited of energy to use!

Last weekend, he showed to us his mosquitoes bite on his legs. We teach him how to pronounce the word ‘BITE’. After a while, he pointed to us the mosquitoes bites marks on his legs and told us ‘Bite-Bite’. He repeatedly told us about his bites when he was scratching it. Glad that Kimi learnt and added a new vocabulary on last weekend.

Email ThisBlogThis!Share to TwitterShare to FacebookShare to Pinterest
Labels: Kimi's Growing Up ~

Grandma's Birthday - A Weekend Trip Back to Pontian

14th May 2011 - I travelled back to Pontian without Hubby and Kimi this time. Ah Ma celebrated her birthday on last Saturday. As Kimi was in Taiping and Hubby couldn't make it, so I back myself with cousins.

It was a short 2 days trip but I definitely would not miss out the delicious 'Bak Kut Teh' for breakfast. A very happy family breakfast with mum and dad, sisters and brother :) Yummy! 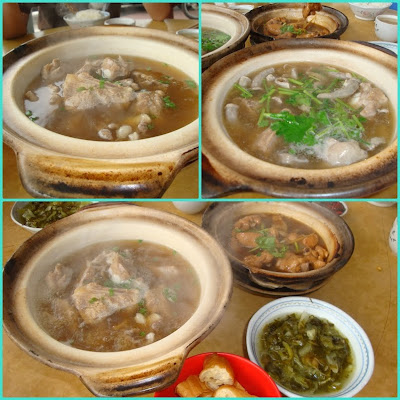 Not to forget, my mum home-made 'Bak Chang' with red bean paste.... Mummy specially made some dumplings for us as most of our relatives were back to Pontian for Ah Ma's birthday over that weekend. 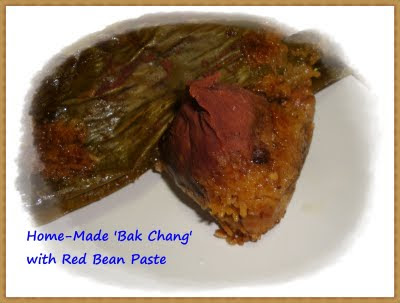 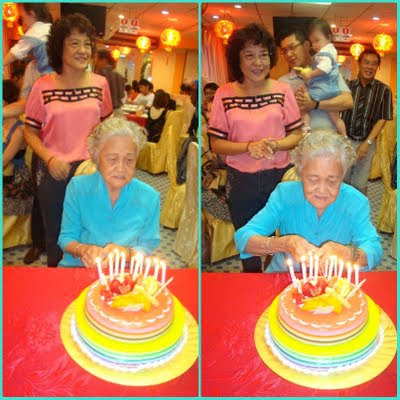 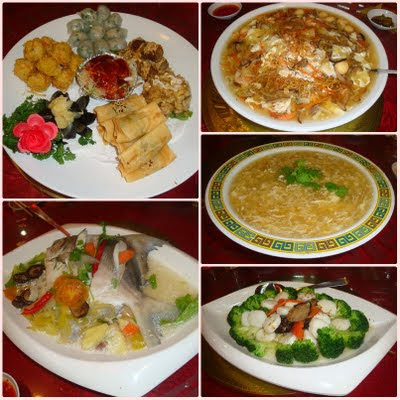 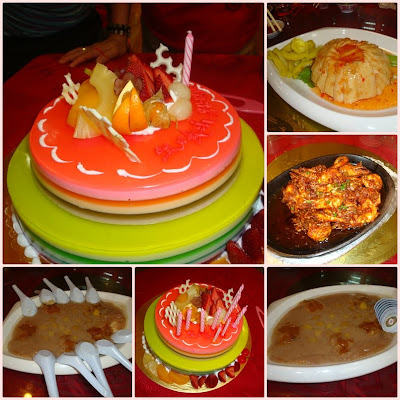 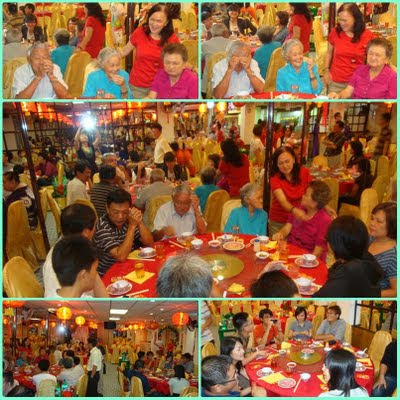 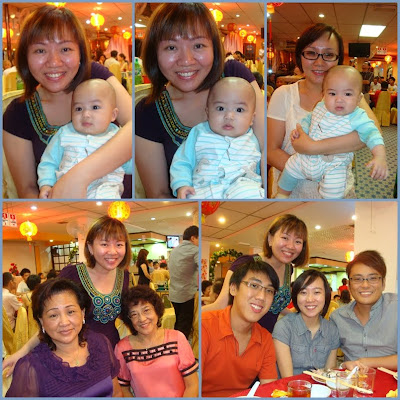 Besides the delicious food, we really had a good gathering! After the dinner, a couple of my aunties went to sing Karaoke with us (together with a few cousins) until 2am. What a HAPPY weekend!
Posted by ~ ShinY's Life ~ at 5/18/2011 07:18:00 PM No comments:

Email ThisBlogThis!Share to TwitterShare to FacebookShare to Pinterest
Labels: Gatherings Around, Lovely Families

Kimi is 20 months' old today... Actually I am a bit tired at this hour, but thinking of jotting down some of his recent activities while he was with us in KL for one week so that I can remember the days we spent together.

Tomorrow we are sending him back to Taiping already... Time flies! One week has gone so fast just like that ~

Last weekend we brought him back to Pontian to spend the long weekend. Hubby took one week off to help to take care of Kimi. Thanks to him so much!

Kimi enjoyed his stay in Pontian very much! Played a lot too ~ 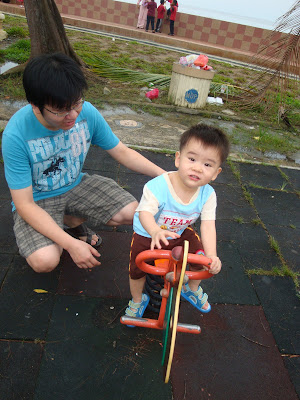 Kimi with his Great-Grandma and Grandma enjoyed viewing the cats in the sea... It was on low tide that evening, so there were some cats down there eating the food ~~ His Great-Grandma purposely threw some food down so that the cats could gather together and ate them, and Kimi could see the cats longer :) 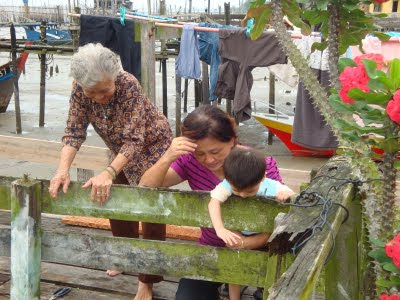 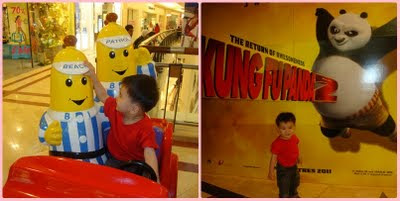 Today I took half day leave, decided to accompany Hubby and Kimi who were at home. We brought Kimi out for window shopping. Before heading back home, we went to try out the Snow Flakes which I wanted to try it for some time. Every time passed by the shop, sure is super long queue. Today we were there early, so not many people and we managed to grab a table. I ordered the 'Soya Ice Series'.... Reminded the waiter not to make it too sweet. So this time at least I find it really worth for a try. The ice tasted good with the soya taste! I think can go back to try out more varieties again 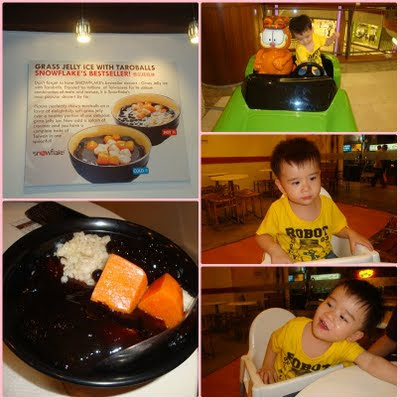 At 20 months' old, Kimi seems like a more sensible toddler. Although he likes to shout when he sees new things, although he likes to run when we let go his hands in shopping malls, he is considered quite manageable for me at his age now. He can understand some simple instructions when we talk to him. Although sometimes he does not follow all, most of time, he seems to understand us and do as what we tell him. Besides too much like to eat when he sees food and too rough, the rest of his attitudes are quite acceptable as of now. Hope he can be more and more sensible as he grows older :) That's my biggest wish for this coming Mother's Day!!

At 20 months' old, he increases some of his vocabularies. He says:
~ 'Dod' for Donald Duck
~ 'Jerry' for Tom and Jerry
~ 'Dei-dei' for Mickey Mouse (I actually don't really understand how this words came out from his mouth because it did not seem to be connected. Haha!)
~ 'Bird'
~ 'Jie-jie' for small girls he meets
~ 'Baby' for babies he meets
~ ‘Mai’ for the things that he does not want (This is in Hokkien dialect)

At 20 months' old, he will hold your hands and ask you to help him do the things that he wants. He will hold your hands when he is down from the car, but then runs wild when he reaches the place he thinks he can play around with. He will nod on his heads when you ask him, 'Kimi, do you want to brush your teeth?' and then walks to take his toothbrush and starts brushing. Although the way he brushes his teeth are not in a very correct way, it is really funny to see him doing all these by himself :)